TOPPLING STATUES? ONE CITY HAD A SOLUTION – SHAME IT ONLY LASTED 24 HOURS.

A sculpture of a black woman who took part in a Black Lives Matter #BLM protest in Bristol, England has been installed on the plinth where a statue of slave trader Edward Colston stood for over a hundred years.

Artist Marc Quinn created the black resin and steel piece of protester Jen Reid, who was photographed standing on the empty plinth after the Colston statue was toppled during the Black Lives Matter march.

Arriving in two lorries before 5am, a team of 10 people worked quickly to install the new sculpture of Reid, who said she had been secretly working with Quinn on the idea for weeks.

After meticulous planning to ensure they could erect the statue quickly enough to have it in place before officials arrived, the vehicles left the scene about 15 minutes after they got there. “I just knew it was going to happen,” said Reid. “They were so efficient.”

It will be a complete surprise to city council. Bristol’s Mayor Marvin Rees previously said any decision on how the plinth should be used would be decided democratically through consultation. No plans had been announced.

After the sculpture was installed, Mrs Reid stood in front of it with her fist in the air. “It’s just incredible,” she said. “This will continue the conversation. I can’t see it coming down in a hurry.”

On June 7, protesters used ropes to pull the Colston statue, which was erected in 1895, from its plinth in Bristol city centre. It was dragged to the harbourside, where it was thrown into the water at Pero’s Bridge – named in honour of enslaved man Pero Jones who lived and died in the city.

Bristol City Council retrieved the statue, which will be displayed in a museum along with placards from the Black Lives Matter protest, from the water on June 11. Quinn’s previous works include self-portrait Self and a sculpture entitled Alison Lapper Pregnant, for the fourth plinth in Trafalgar Square, London.

“Jen created the sculpture when she stood on the plinth and raised her arm in the air. Now we’re crystallising it,” he told Britain’s Guardian newspaper. He said his team had carried out surveys, as well as health-and-safety checks and installed the sculpture in a way that made it “extremely difficult to move”.

It’s a model for the rest of the world with the original statues not destroyed but put into context and the new statue reflecting the spirit of the recent protests.

What a pity the model only lasted 24 hours. The statue of Jen Reid was removed by the city council less than 24 hours after it was erected. Fast action by a city known for having been debating the removal of slave trader Colston for years without reaching consensus. 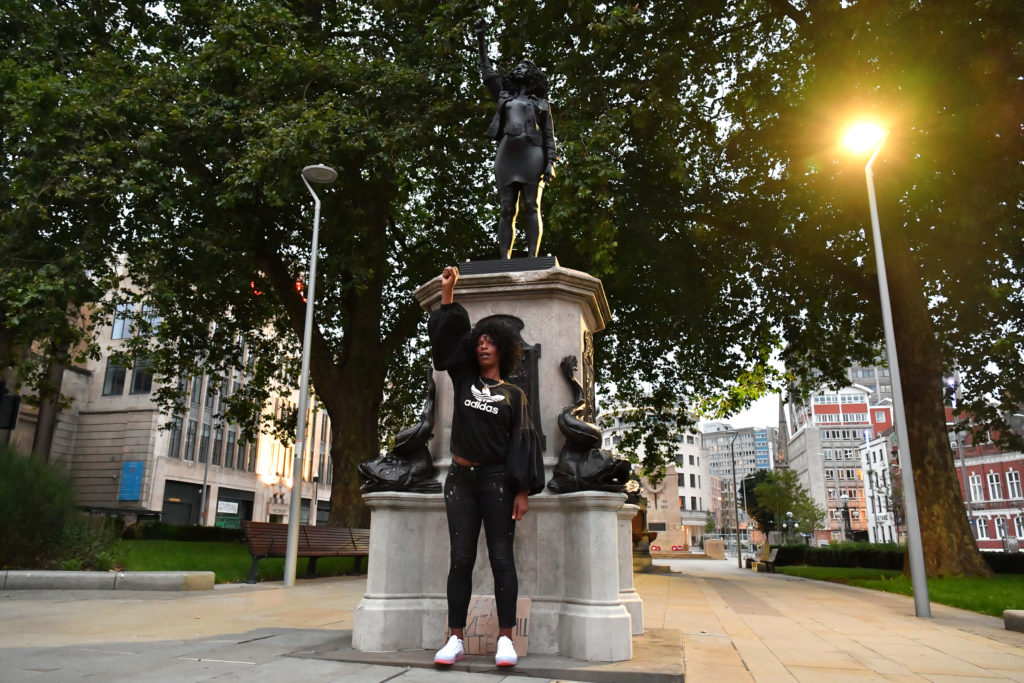 BRISTOL, ENGLAND – JULY 15: Black Lives Matter protestor Jen Reid poses for a photograph in front of a sculpture of herself, by local artist Marc Quinn, on the plinth where the Edward Colston statue used to stand.

Mayor of Bristol, Marvin Rees, had previously said that any decision on how the now-empty plinth where Edward Colston once stood should be used would be decided democratically through consultation. It seems the “fcuk you'” to the protestors and their cause was more important than putting the statue’s removal to a vote.

In a statement, Bristol City Council confirmed the Black Lives Matter sculpture had been removed:

This morning we removed the sculpture. It will be held at our museum for the artist to collect or donate to our collection. Bristol Mayor Marvin Rees issued a statement yesterday about the need for a democratic process where the people of Bristol decide the future of the plinth

Sententious and pompous in less than 280 characters.

The decision to remove the sculpture has proved controversial, with some in favour of it remaining and others arguing that removing it was the right thing to do as it was placed there without first obtaining permission from the notoriously evasive city council.

Oh well. Another small victory for the cause of divide-and-rule as the latest opportunity to engage is met with a metaphorical wall of riot shields. In one English city, at least.